Update on financial relief and 2019 Safety Groups
I’m sure each of you, like others across the province and beyond, are adjusting to the extraordinary times in which we find ourselves. I want to reassure you that the WSIB is here to support the people of Ontario during this difficult time. We have already introduced a number of measures to help ease the strain many are feeling right now. 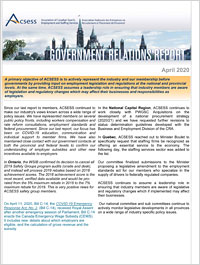 A primary objective of ACSESS is to actively represent the industry and our membership before governments by providing input on employment legislation and regulations at the national and provincial levels. At the same time, ACSESS assumes a leadership role in ensuring that industry members are aware of legislation and regulatory changes which may affect their businesses and responsibilities as employers.

Mike Russelo, Operations Manager at Drakkar Logistics, is a shining example of the growing opportunities within the Canadian trunking industry. Following in his father’s footsteps, Mike started his career as a professional AZ driver in the ‘90s. He was travelling throughout Canada and the United States when a contract position at Drakkar caught his interest. He had no idea this contract would be a stepping-stone to full-time employment with endless opportunities to hone his talents. “This sector is dynamic, no matter what role you play. It’s always changing, always challenging,” says Mike.

MISSISSAUGA – June 3, 2019 – From June 2 to 8, the Association of Canadian Search, Employment & Staffing Services (ACSESS) and its 1,500 member offices celebrate Staffing for Canada Week to recognize the $15 billion industry’s more than 500,000 employees and the two million job seekers they place each year.

With Canada’s unemployment rate at 5.7 per cent (for May, 2019), the staffing industry plays a vital role in helping businesses get the right, sometimes scarce, talent on board in a timely manner.

MISSISSAUGA, Ontario - May 22, 2019 - The Association of Canadian Search, Employment & Staffing Services (ACSESS), Canada’s voice of the $15 billion recruitment, employment & staffing services leader, announces its National Board of Directors for the 2019-2020 year.

Did you attend (or have to miss) Leading Canada to Work - ACSESS 2018 National Conference?

We're excited to share this short video for learning, networking and exhibitor highlights. 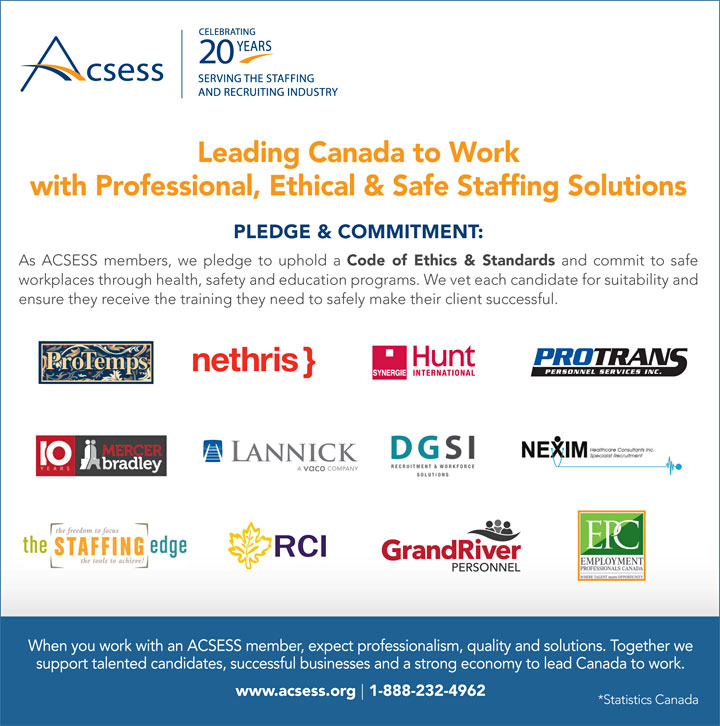 Mary McIninch, Executive Director, Government Relations,  ACSESS was a guest contributor in this months HR Reporter magazine.  Please click on the link to read her take on the “fly by night temp agencies” and what changes are being made.

Don’t Take Yourself Too Seriously

Angela Chambers, President and Managing Partner of Mercer Bradley joins Todd Lewandowski in his Podcast Series entitled Secrets of Staffing Success. Angela talks about staffing and her role at Mercer Bradley, how valuable ACSESS's training is to her staff, as well as about her involvement on the board.

Mary McIninch, executive director ACSESS, provides commentary on the benefits of temporary/contingent work in the Brantford Expositor as the  City of Brantford considers a resolution to ban hiring temporary workers to fill many city jobs.

Today the Globe and Mail published a contributed article called HR leaders need to tap into their data gold mine under my byline. It includes commentary from ACSESS leaders Jeff Nugent, Managing Director, Contingent Workforce Solutions and Marc-Étienne Julien, CEO Randstad. Eighty-two per cent of organizations plan to focus on workplace analytics in the next three years (2016 report by prestigious Society for HR Management Foundation/ Economist Magazine Intelligence Unit).

Wednesday July 20, 2016 - The following article was written by Mary McIninch, Executive Director of the Association of Canadian Search Employment and Staffing Services (ACSESS), as a Special to The Globe and Mail, and published in the Globe Careers' Leadership Lab series, where executives and experts share their views and advice about leadership and managment.

When contacting government officials in relation to temporary help and professional services, ACSESS members are expected to follow our Code of Ethics and observe the highest principles of integrity and professionalism.

The Association of Canadian Search Employment & Staffing Services (ACSESS) reserves the right to refuse/cancel registrations. If ACSESS refuses a registration, registrants will be offered a full refund.